And what did you take from that besides something about dessert and condensed milk? SUMMER!! But, not the happy-it’s-time-for-beach-and-sunblock kind of summer. No. Korean summers are not that happy-go-lucky. These summers are hot and humid. And it’s just July… Already the amount of joy you get from the great outdoors quickly melts into a sweaty puddle on the floor and your sanity can only be found beneath the air conditioner, while hiding indoors (thankfully this includes public transport). But, if you do venture outside, I do highly recommend treating yourself to bingsu!

Weekly night club runsI joined the OVD Running Club a couple of months ago who meet every Thursday night at 8pm to enjoy and explore Busan while running past some really lovely sights lit by stars and streetlights (and a small boombox for jams on the move). 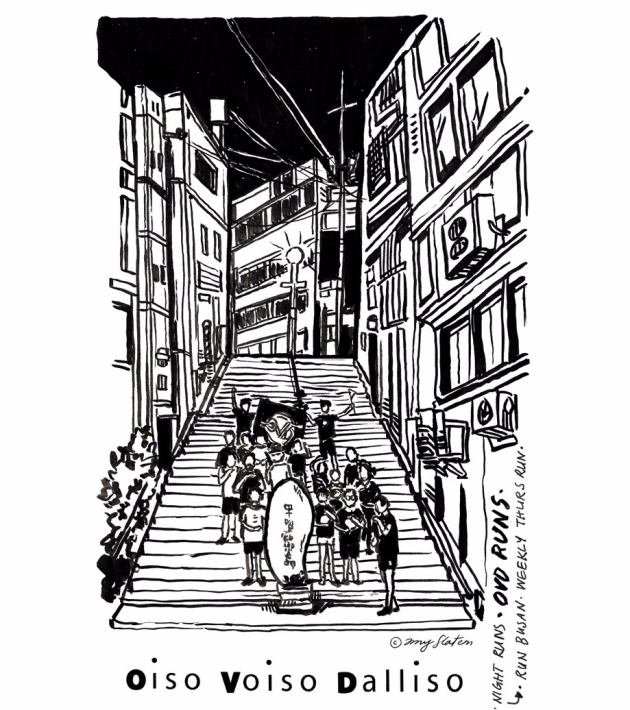 As much as we run, we photograph. Sometimes I think the lines between running club and photography club are blurred with a good number of photo stops for group shots posing with our club flag and some impressive site behind us. The pace is fairly quick so often these stops are needed though. 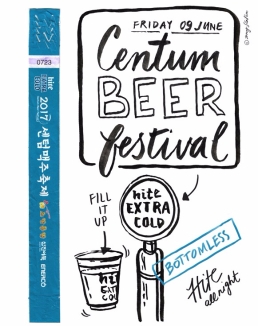 It was just Hite beer (one of the popular local brews), but once you got a beer mug/cup upon arrival you could literally pour your own beer from then on out.

24 June / Sat: Lost on the Run
Some context to this image, at the time I had a commercial illustration project with weekend deadlines and a very particular style I had to adapt to and obsess with over a short amount of time. So it consumed my thoughts and my weekend (and this illustration). By Saturday evening I hadn’t left my house or done much else other than sitting in front of my computer.
Having lived in Korea for 4 months now, I had yet to go for a road run by myself. It’s one thing to get stared at as a foreigner walking around normally in public spaces, but it’s another to be a running and sweaty foreigner thudding along the roadsides with no other joggers around, ever. 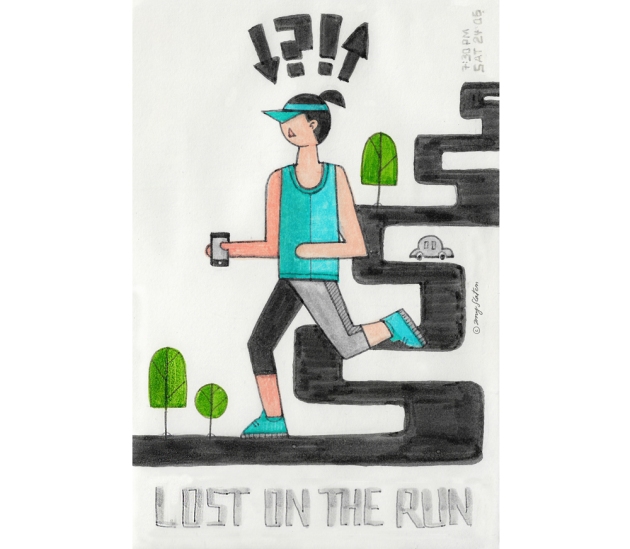 Anyway! I set off around 7pm to beat the heat (if that’s possible), and after a good few km’s and dwindling light I found myself running in circles and coming back to the same start of a highway with no pedestrian paths. After some more time, slight panicking and more running, I managed to navigate back to the known.

25 June / Sun: Burgers & Bingsu
Maybe I’m just looking for things to draw, but being reunited with avo, my love (and on the best burger I’ve had here) combined with a chilled Sunday lunch with friends – it just seemed drawable. Topped off with a trip to the bingsu cafe afterwards and my weekend was complete. 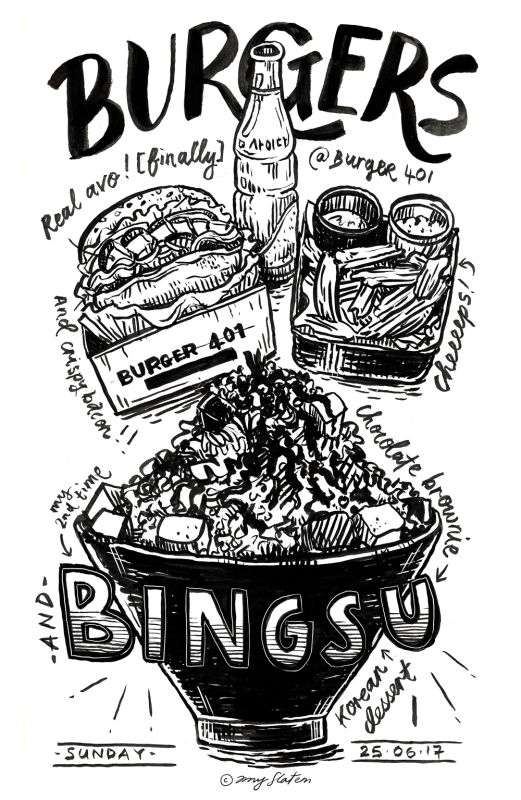 As with most Korean dishes, it’s meant to be shared so you get a huge bowl piled with the shaved ice base topped with chocolate brownies, cheesecake and a side of condensed milk and two or more spoons. Are you sold yet?

03 July / Mon: Summer Nights
Too hot. Beep. Too cold. Beep. Buzz. Buzz. Slap! Toss. Turn. Buzz. I’M GOING TO KILL YOU!! 3am. Toss. Turn. Alarm. Damn.
I really shouldn’t say anything bad about my aircon/life support, but it blows directly onto my bed so it’s either Antarctic blizzard when it’s on or Sahara Dessert when it’s off. 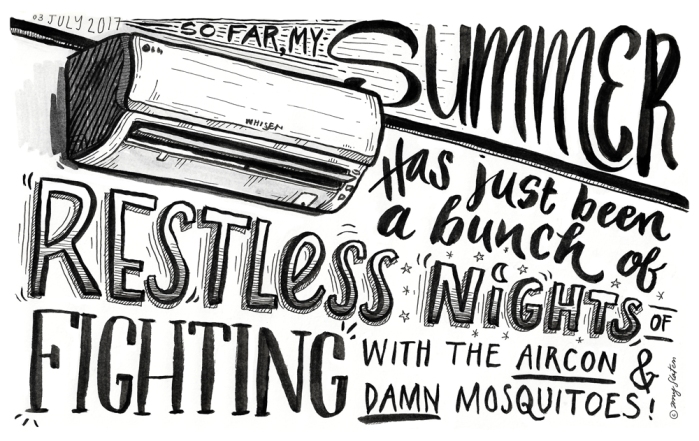 And when it’s off, the mosquitoes make sure to use the opportunity of not being blown away anymore to come buzz around and sit ON my face. So I end up semi-consciously slapping my face in the hopes of killing those bloodsuckers! Mozzies: 1. Amy: 0.

How much is that doggie in the cage?
I live quite close to Busan’s main dog meat market at Gupo Market and unfortunately I drive past the alleys with the red cages holding these poor fluff balls on my way to work every day. 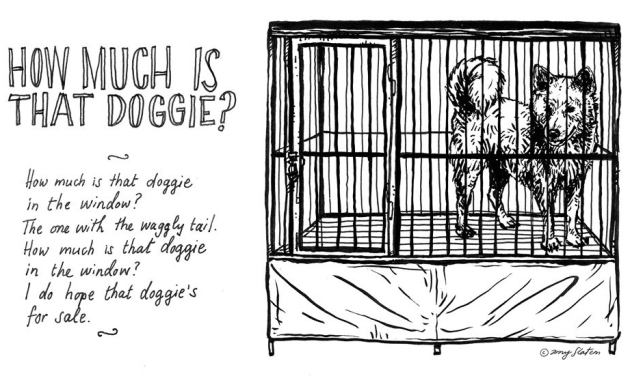 09 July / Sun: Sunday Strolls
Since I’ve found that the closest park to me is a manageable 3km away, I’ve started making a Sunday strolling habit out of it to have a nice end of weekend walk. I get to watch people roller blading, kids riding bikes, and old people working out on the equipment. People-watching hot spot, I tell you! 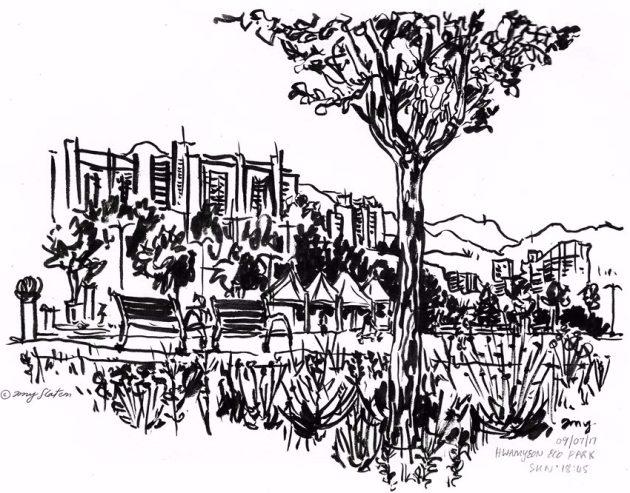 This Sunday included taking the tools and opportunity down to Hwamyeong Eco Park to have a quick sketch on damp paper, thanks to the humidity.

I had a ball working on this project for @petcircle with all these pets with attitudes. You’re not supposed to have favourites, but I think the birthday cat and dog may just be 😸🐶🥳.
My latest collab with petcircle.com.au has been to create the fun illustrations for their new range of Curious Boxes. These are filled with themed treats and toys for cats and dogs and also include the special birthday boxes, which yes, you guessed it… feature a frenchie!
What’s unnecessarily stressful, and why is it writing on the first page of a new journal?
Bitter is Better when you’re a lemon🌝.
Resting bitch face or just your average everyday face?
Wanna join my Ride or Sigh Club?